While a very simple procedure today, setting up a phone service in Poland did not use to be so in the socialist era. Phone service was in a way reserved for government institutions, plants and production facilities, with individual access mostly limited to party leaders and possibly party members. Ordinary citizens could only file telephone setup applications and wait for many years – they might just get lucky. Most, however, never got to get the phone installed before the onset of capitalism in the early 1990s – they had to resort to street booths which were frequently vandalized and did not work, so the search for an operational booth could even take hours. The situation changed along with the system change, and although people still had to wait for their much desired telephone service, it finally could be set up and freely used. 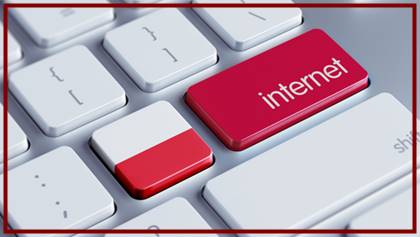 This coincided with the appearance of cellular phones (telefony komórkowe) and the Internet in the late 1990s. While a generally coveted piece of equipment, the early cell phone was available to the few who could afford the exorbitant rates. Internet access, on the other hand, was limited to companies and businesses, with people not really understanding what it could offer them and how they could use it. As was the case with the phone, so with the Internet – everyone just wanted to be able to use them, and people would approach their friends who would work for a foreign business to allow them to make a call or use the Internet to be able to experience these latest technological miracles. With the continued development and better customer focus the cells (komórki), as they are popularly referred to, and the Internet (frequently abbreviated to net in Polish) became increasingly accessible to the general public, with everyone being able to afford a phone with a plan (abonament) or pay as you go (na kartę), or pay a monthly Internet subscription. Thanks to the cut-throat market competition the rates have dropped significantly, and today even children carry cells, many of them even the latest smartphones (smartfony) or iPhones, with mobile Internet access (mobilny dostęp do Internetu) and a variety of applications enabling them to communicate with others and track the latest developments in the social network.

If you are looking to set up a landline telephone service (telefon stacjonarny) in Poland, the national operator (Telekomunikacja Polska), today practically non-existent due to the merger with Orange, used to be the leading provider. However, there are virtually hundreds of competitive providers, mostly cable network operators (operatorzy sieci kablowych) who will offer integrated service bundles (pakiety usług) for a monthly flat rate (ryczałt miesięczny), covering television, phone and the Internet. You can also approach Orange for that, and in addition to the standard telephone offer they will try to sell you a mobile phone, television and the Internet. The times have changed – no more waiting for the service and the rates are also highly accessible – in 2012 over 70% households and over 95% businesses had Internet access. As far as the mobile phones are concerned, users in Poland have a choice of 4 major providers (T-Mobile, Orange, Plus GSM and Play), with several virtual providers (e.g. Virgin Mobile). Most people have regular monthly plans but there are also thousands of pay as you go users. The high accessibility of mobile telephony (in 2012 there were over 54 million cell phone users in Poland) has clearly contributed to the erosion of landline services, with the latter still used by businesses and older people who prefer the equipment they know how to operate.

My, what a technological change we have experienced in just a couple of decades!