The first encounter may occur if you cross the border near Szczecin, how can you say that word? How can anyone say a word, which is full of consonants? Initially the English speaker is confused consonants are bundled together and not only consonants, there are accents under the vowels, over the vowels and even on the consonants! 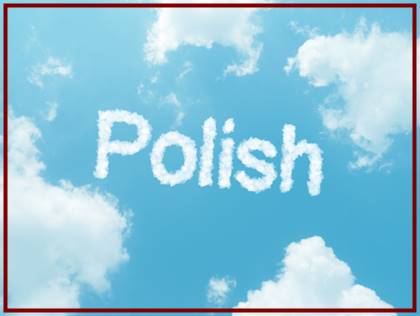 The only explanation I can offer is that the Latin alphabet was not designed for the Polish language, it has been adapted to fit the Polish language. It is important to realise that every single letter is always pronounced the same. One vowel and does not affect how other vowels are pronounced, they are individually pronounced in sequence, but sometimes very quickly. It is the same situation with consonants; each consonant has its own sound. When one consonant follows another the consonants' sequence produces an individual sound.

So much for the theory, but how does one cope with it? The best advice is to forget your inhibitions and go with the flow. Just ask someone to repeat the word slowly then forget the spelling and try to imitate it. Concentrate on imitating the sounds. When one is able to make the sounds there is a reward. The spelling, contrary to English, is consistent a Pole never has to ask how something is spelt, at least in Polish! To return to Szczecin; the S when followed by Z produces a "sh" sound, as in "sheet". This is followed by C, which alone has a "tz" sound as in "Switzerland", but when followed by Z produces a "ch" sound, as in "cheap". The E is sharp and hard, the solo C is a rapid "tz" and the I is sharp, while the N is mercifully normal!

Happily Poles are very receptive to foreigners, who make the effort to learn Polish, a contrast to the experience of English speakers travelling abroad somewhat nearer home! Learning Polish, as an adult is a little bit like learning to drive a car, it is best not to learn Polish from a person that you have an intimate relationship with! Polish is also a language with very little regional difference, the language in comparison with English is virtually uniform everywhere.

Are there really no exceptions? Actually, having raised the matter I must admit that date use one that I can think, this is the Polish word for bread - chleb -in fact C and H together produce a sound which is indistinguishable from H on its own. Assuming that while experimenting with this we had been travelling, then we would have already reached Poznan, an excellent place to stop for refreshment. The bread or - chleb - might be accompanied by herrings - sledzie, that is a very soft S-L- E-D-J E. We might wash this down with water - woda - here the W as everywhere is pronounced as V. The same is true of vodka - wódka - here the W is pronounced as V while the Ó, soft o, is pronounced "ou", the K provides the "c" for cat sound.

It is well worth starting to speak Polish even if initially you only have a few words, before attempting writing or even reading Polish. This is because it will be very much easier to write or read and deal with Polish grammar if you have a relationship with the words.