Like many European countries, Poland is staunchly religious, and staunchly Catholic at that. It takes religious holidays and observances very seriously, while Polish people are very proud of their religious identity, and many attribute the country's very survival, during the period of fragmentation that characterised much of the last century, and saw Polish borders literally erased from the European map, to the religious isolation that left them in stark contrast to the German protestants to the east, and the Russian communists to the west. But enough of the serious stuff; while religious festivals in Poland can represent important affirmations of national and religious identity, they are also great fun. Okay granted, there's no fluffy bunny delivering chocolate eggs, but there's a whole host of other things you can get up to in this spring festival – from gorging on doughnuts to nationwide water fights. 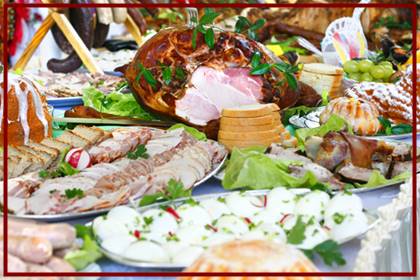 The run up to Easter weekend begins, like in many Christian calendars, 40 days before, when the Polish mark Ash Wednesday (Środa Popielcowa) with a special religious ceremony during which religious officials place ash on the heads of their congregation. The following day, Tlusty Czwartek is aptly named (translating roughly to 'Fat Thursday'), being marked by excessive consumption of sweet doughnuts.

Actual Easter celebrations begin on Palm Sunday (Niedziela Palmowa), one week before Easter weekend, when Polish families get together and get creative with colourful flowers, dried fruit, sticks, coloured paper, and anything else that people think suitable. These are subsequently taken to church services to mark Jesus' arrival in Jerusalem. In some regions of Poland competitions are held for the tallest, most creative and colourful 'palms'.

The 'Wielki Tydzień' begins straight after palm Sunday and represents a week long fast (the Wielki Post), where traditionally, Polish people adopt an uncharacteristically frugal approach to food and meals, by not eating meat and fatty foods. The week culminates with 'Wielki Piątek' and 'Wielka Sobota', when it’s usually the youngest member of the family that takes a basket of food - typically of white chocolate lamb, (baranek, a Polish symbol of Easter), bread (chleb), salt (sól), various meats (mięso), and of course eggs (jajka) - to Church, receiving a blessing in return. Decorated eggs, known as pisanki are a common symbol of Easter in Poland; these are hand painted, drained eggs (wydmuszka) and are always found in the baskets offered on 'Wielka Sobota'.

On Easter Sunday (Niedziela Wielkanocna) Polish families begin their day by eating a small amount of food from the basket taken to church the day before. Some regional areas of Poland (specifically in the East) also have the tradition of eating the Polish soup żurek for breakfast as well as foodstuffs from their basket, while all Polish people traditionally eat żurek during the day on, along with two types of sweet cake (babka wielkanocna, a sponge cake dressed with chocolate or icing, and mazurek, a cake topped with icing, fruit and nuts).

Easter Monday (Known as either Lany Poniedziałek, Śmigus-Dyngus or Poniedziałek Wielkanocny), while not as religiously important or intensely traditional as Easter Sunday, it is a day for fun; when Polish people take to the streets and soak each other with water pistols, buckets and any other water vessel they can get their hands on. This tradition started as a kind of warped dating agency, where men were encouraged to throw water on the women they wanted to woo.

Poland's Easter, like Christmas, is a national holiday in Poland, but it's considered far more important. It's the main time of the year when Polish families get together to enjoy each other's company, to keep this multitude of traditions alive.